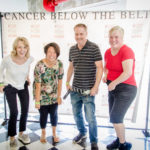 View the Houston Chronicle’s coverage of Kelly Gale Amen’s loft and Cancer Below the Belt. 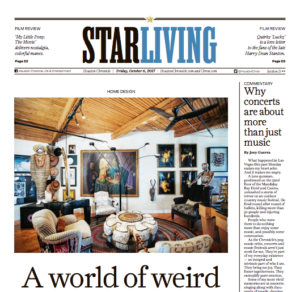 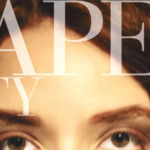 Cancer Below the Belt honors its partners, Kellye Gray, Off The Wall Gallery, and Mezlan for their support of awareness. Even though this event was rescheduled, we are still proud to join in spreading awareness through Paper City’s September 2017 Issue. 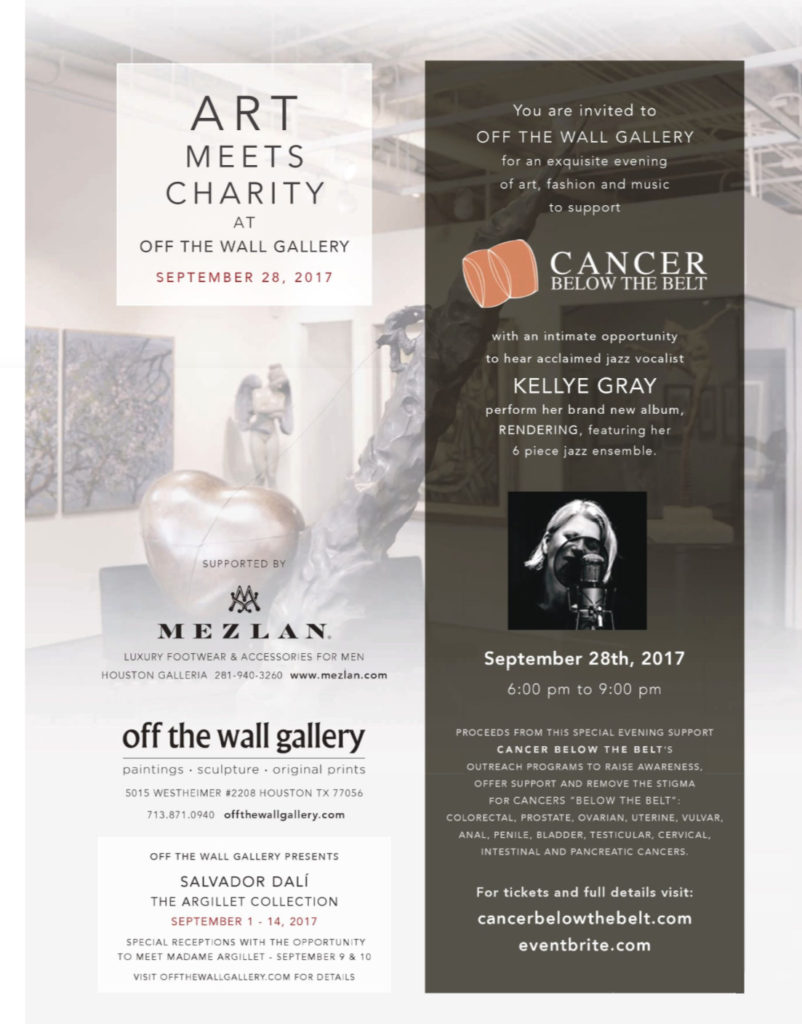 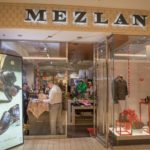 Cancer Below the Belt is partnering with Mezlan Shoes in Chicago, Washington D.C. and Atlanta for a Father’s Day awareness tour!

Stay tuned for updates on the tour! 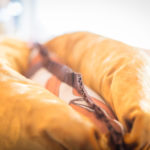 Cancer Below the Belt is proud to partner with Dr. Dawn Ewing of Holistic Health Alternatives to promote the 2017 Annual IABDM Conference Annual Meeting to be held October 19 – 21, 2017 in the Woodlands! CBTB is providing two custom Athena Pillows for auction in support of IABDM. These pillows will be auctioned off at the meeting to raise funds for IABDM.

CBTB recognizes Dr. Dawn for her work in holistic health and thermographic services. Through the use of thermographic imaging and knowledge of the meridians of the body, one can gain insight to their health. These tools can be used to formulate treatments for simple illnesses to complex issues such as cancer.

Each of us has a choice: Spend a lifetime with drugs and surgery to “manage” symptoms as they occur or honor the body’s innate wisdom and support its ability to self-regulate and heal.

Dr. Dawn Ewing offers a wide range of diagnostic and therapeutic services to help you understand your current health situation and guide you through the process of improving it – gently and powerfully, gradually and effectively. Combining 21st century diagnostics, quantum medicine and the traditional wisdom of natural healing, the holistic health services she offers include thermography, homeopathy, biological terrain analysis (BTA)/Meridian Stress Assessment, heavy metals testing, nutritional analysis and more.

Her concern is not with diagnosing, treating or prescribing for disease as a conventional physician. Rather, it’s to help you gain a better understanding of your current degree of health and how natural practices may be used for self-care. Her goal: Give you the information and resources you seek in your quest to improve and sustain your health and well-being.

We were born to be healthy. 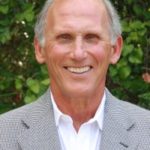 Cancer Below the Belt is proud to embrace the field of biological dentistry, and our partner, Dr. William P. Glaros, DDS. The practice of biological dentistry aligns with CBTB’s mission of cancer prevention by using methodologies that reduce an individual’s exposure to cancer-causing agents. We are excited to have Dr. Glaros on board as our dental advisor! Check out Dr. Glaros’ Website for more information. 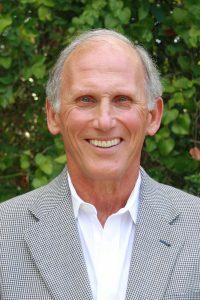 Dr. Bill Glaros has been practicing dentistry in Houston since receiving his degree as Doctor of Dental Surgery in 1974 at Baylor College of Dentistry. He also holds a Bachelor’s in psychology from Southern Methodist University.

Over the past 13 years, Dr. Glaros has made 10 week-long medical/dental mission trips to Guatemala sponsored by Faith In Practice and serving with a core of friends and colleagues. It is always a highlight of his year.

His leadership has made Dr. Glaros a highly respected figure in the field. In 2013, he was honored to accept an invitation to be interviewed by leading natural health expert and integrative physician Dr. Joseph Mercola.

Born in Weslaco and raised in Houston, Dr. Glaros has been married to Joanne – yes, the one who has worked in his office for years – since 1970. They are the very proud parents of three adult children and four grandchildren.

Dr. Glaros plays bass guitar monthly at church and continues with his golf, which he describes as a work in progress. 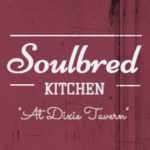 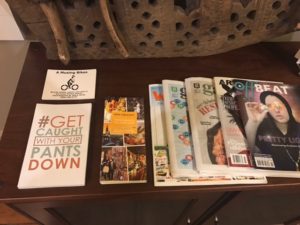 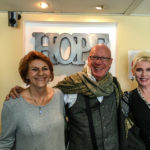 CBTB visits Hope 4 Cancer Institute! CBTB is proud to explore the options available to provide hope to those affected by cancers below the belt. Hope4Cancer is a full service in-patient treatment center for cancer patients located in Baja California, Mexico.

H4C combines the latest non-toxic, evidence-based medicine that selectively targets cancer cells, with a sophisticated WHOLE BODY CANCER TREATMENT PROGRAM. As a result, they can comprehensively treat not just the cancer itself, but also the often ignored, underlying conditions that stimulate the growth, and later, the resurgence of cancer. 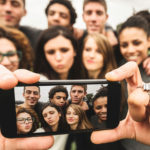 [gdlr_styled_box content_color=”#ffffff” background_color=”#000000″ corner_color=”#3d6817″ ]A new American Cancer society report indicates that Millenials are at greater risk for colon and rectal cancer as someone born in 1950. Read USA Today’s coverage below and check out colon cancer awareness page.[/gdlr_styled_box]

[gdlr_dropcap type=”circle” color=”#ffffff” background=”#555555″]C[/gdlr_dropcap]olon and rectal cancers have increased dramatically and steadily in millennials and Generation X adults in the United States over the past four decades, a study confirmed Tuesday.

While scientists have not pinpointed an exact cause, prime suspects include obesity, inactivity and poor diets, said researchers from the American Cancer Society, reporting in the Journal of the National Cancer Institute.

“Colorectal cancer had been thought a success story,” because overall rates have fallen as screening has increased among older adults, said lead researcher Rebecca Siegel. “But it appears that under the surface, the underlying risk for colorectal cancer is rising, and it is rising pretty quickly among young adults.”

Previous studies picked up increases in young adults, but the new study provided new age-group details from nearly 500,000 cases reported between 1974 and 2013.  For example, it found rectal cancer rates rose an average of 3.2% a year among people in their 30s, starting in 1983.

That means more people getting colon and rectal cancers today “are in their most productive years,” Siegel said.

“We are absolutely seeing this,” in cancer clinics, not only in the United States, but around the world, said Thomas Weber, a surgical oncologist who specializes in colorectal cancers and is a professor at the State University of New York Downstate Medical Center.

The latest data should “really raise the alarm,” he said.

Still, no health group recommends average-risk young adults get screening tests such as colonoscopies and stool testings. The cancer society will look at whether that should change, Siegel said. All screening tests come with potential harms, as well as benefits, she noted.

Right now, screening is recommended for adults over age 50 and for younger adults with certain genetic syndromes, gastrointestinal disorders or family histories. Because screening can catch polyps before they turn into cancer, it is the best explanation for falling colorectal cancer rates in older adults, Weber says.

Most young adults are tested only after symptoms develop, “and usually by the time you have symptoms, the disease is more advanced,” Siegel said.

Known risk factors for colon and rectal cancer include obesity, inactivity and diets high in red and processed meat and low in fruits, vegetables and whole grains. The new study did not look at those factors. But the fact that the increases occurred as the nation grew heavier suggests that “there are likely complex interactions going on between physical inactivity, unhealthy diets and excess body weight,” Siegel said.

Many young patients have no obvious risks, Weber said, so “we suspect there may be additional factors at play.” 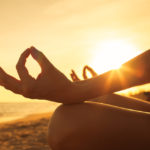 [gdlr_quote align=”center” ]If effective, findings from this study will expand our understanding on the use of mind-body practices to improve overall health and wellness in underserved populations and will inform future research efforts.[/gdlr_quote]

UNIVERSITY PARK, Pa. — Obesity is recognized as one of the leading causes of cancer and accounts for roughly 14 to 20 percent of cancer deaths. Physical activity can reduce obesity and cancer risk, but most U.S. adults fail to meet leisure-time physical activity recommendations.

Scherezade K. Mama, assistant professor of kinesiology, seeks to better understand and reduce these risks. A recently awarded American Cancer Society Institutional Research Grant for $29,717 from the Penn State Cancer Institute will allow Mama and colleagues to study a faith-based, mind-body intervention that seeks to increase physical activity and reduce health disparities, including cancer risks, among those who reside in rural areas.

Mama and her team are currently recruiting study participants.

“Physical inactivity and obesity are especially prevalent among African American and rural adults, contributing to health disparities in these populations and putting them at greater risk for cancer and other chronic diseases. Thus, innovative and sustainable strategies to increase physical activity are needed in this population,” Mama said.

Fifty men and 50 women will participate in Harmony & Health for 14 weeks. Participants will complete three in-person assessments, participate in a mind-body relaxation and stretching program twice a week for eight weeks, and practice stretching and breathing at home. The study will be conducted at the Health Disparities & Physical Activity Research Laboratory (HDPAR) at Penn State and at the Unity Church of Jesus Christ in State College, Pennsylvania.

The study is a replication of a pilot study conducted by Mama in a mega church in Houston, Texas.

“If effective, findings from this study will expand our understanding on the use of mind-body practices to improve overall health and wellness in underserved populations and will inform future research efforts,” Mama said.

Eligible participants must be at least 18 years of age, overweight or obese, able to read and write in English, exercise less than two hours per week, and not have any health conditions that will be worsened by physical activity. Participants can be any race or ethnicity.

No equipment is needed for the study, and participants will be compensated for their time. Space is limited. For more information call the HDPAR Laboratory at 814-863-0132 or email HDPAR@psu.edu. 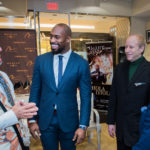 Vernon Davis stopped by Mezlan on Thursday to sign autographs and take photos with fans. Cancer Below the Belt is proud to be in partnership with Mezlan and was excited to be a part of the excitement of the evening! 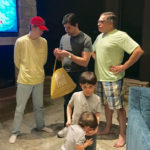 Cancer Below the Belt is excited to announce the winning ticket from our Super Bowl bench raffle! 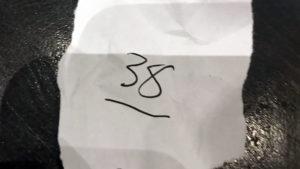 The drawing was held Sunday night during the Super Bowl (in between the Falcon’s early scoring streak and Lady Gaga’s elevated performance!). 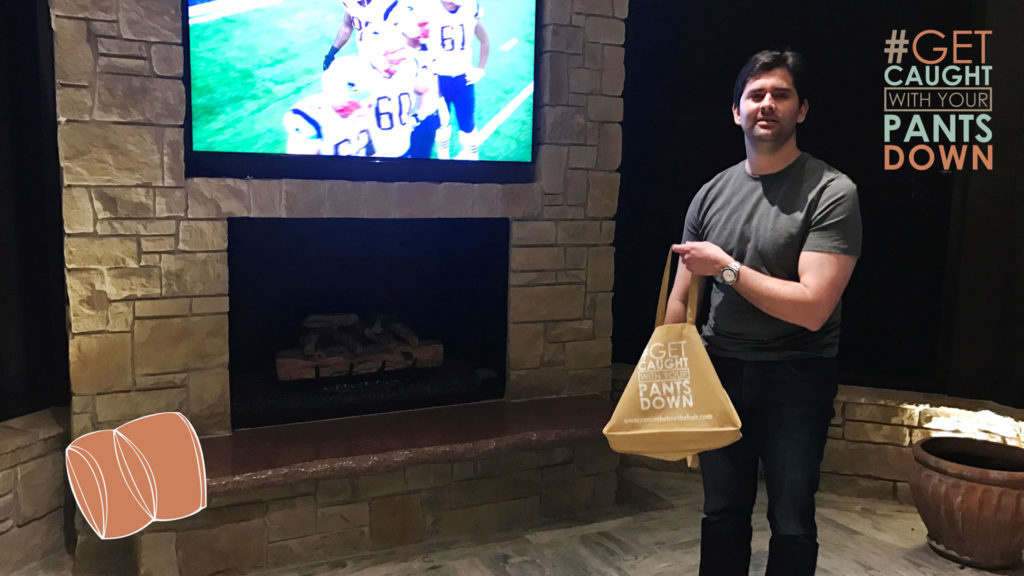 Thank you to everyone who participated in the raffle for your support of Cancer Below the Belt! 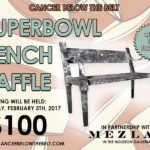 Only a few days left to purchase your ticket! Win a KGA Design Cancer Below the Belt commemorative bench! Each raffle ticket is a chance to win! Only 100 tickets will be sold!